One of the big turn-offs to me about fantasy roleplaying, D&D in particular, is combat. It's supposed to be one of the pillars upon which the genre (if not the entire hobby) is built on.

The problem is simple: I take my RPG cues from storytelling. Motivation, drama, tension, and action are the pillars of my games. D&D and its entire sub-genre more often than not take their cues from gaming, particularly wargaming/minis gaming.

The simple solution to this is "play something else." There are dozens, if not hundreds, of other RPGs out there that handle combat more like I want it to be handled (two of the hottest games in the hobby that aren't D&D right now spring immediately to mind: Dungeon World and Fate Core). However, my problem has a particular wrinkle: my own, private Prime Directive, to bring as many new people into the hobby as possible. I can do that with those other games, but the path of least resistance is D&D. It can be hard to be a coffee drinker if you don't like Starbucks.

So I've started to wonder: how do I make myself like Starbucks? How do I reconcile my narrative, story-driven mind with the more tactical play of D&D? Following is what I've come up with. Please, Dear Reader, look over this wild combat concoction and tell me what you think. Specifically, I'm looking for red flags that jump right off the screen, stuff you know may be a problem right off the bat. I realize playtesting is where the rubber meets the road, but maybe a few of you can help me with the initial stuff before we even get to that point.

The point of this system is to create a combat system that is fast, fun, and interesting, where narrative doesn't have to take a backseat to dice rolling, and a system that is tactically rich but can take place entirely within "the theater of the mind" without need for maps or minis. Whatever else this system does or does not do, if it does those things, I'll consider it successful.

And so, I give you Dungeons & Dragons Narrative Combat.

Again, please let me know what you think, if you see any issues with it right away, or if there are any ways I could improve it. Thanks for reading! 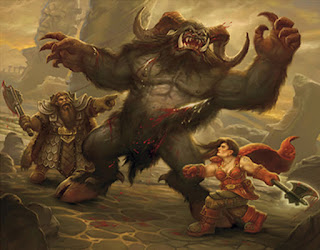 To really understand the magic and grace of a tabletop roleplaying game, you have to understand how all of those elements interact with each other in concert. They are exponentially greater than the sum of their parts. Good RPGing is always, always a three-way dance between the players, the story, and the game. A deficiency in one area...say, a game doesn't have good enough rules...can be compensated in another area...the group house-rules it, or the story dictates how it should be handled. The unfortunate side of this, though, is that the various elements are always trying to undercut the roles of each other. Game designers are trying to make games where story doesn't matter; groups are trying to downplay the significance of story to make the system cooler; and the dramatic needs of a story often run against what the players want, or what the game allows.

But the correct answer always has been and always will be a balance. A deliberate, delicate, symbiotic relationship between all three.

Understanding this is important. Why? Because a tabletop RPG, done correctly with all those elements in the right balance, is it. THE EXPERIENCE. There is nothing else like it in the world. Take the human, electric energy of a live concert. Then imagine yourself as part of the band. Then imagine that you're playing alongside your friends. And the crowd is packed, elbow-to-elbow, with the shit of life; the crabby coworkers, the boring professors, the abtuse family members. You are impressing the hell out of them with your performance, but like any good art, it's not about them. Fuck them. It's about you, you and your friends, doing something that cannot be recorded, cannot be DVR'd, cannot be bottled up and done again and again and again. It's special, it's magic, it's unique, and it's you. Every session ever only happens once and never happens again.

That's what at stake here when we think about what an RPG is.