Recap/Review of Jewel of Yavin

This is a spoiler-free recap and analysis of yesterday's Star Wars: Edge of the Empire game.

Yesterday, I hosted The Star Wars: Edge of the Empire module "The Jewel of Yavin" for five players. One player was completely new to roleplaying games. Of the five players, two of them had experiences (250 Xp) characters; the rest were starting characters (though I fudged obligation rules a little and gave them 10 extra, as the adventure appeared to be designed for more experienced characters, anyway.)

Overall, the session went extremely well. It felt so good to be behind the GM's screen again! I don't know why I get such joy out of running games as opposed to playing in them, but the difference is real, and its profound. And the confidence I have and the quality of the game also get heavily influenced by my prep, and I did quite a bit of prep for this game. I didn't know everything, of course, but structually I was very comfortable with the pace and flow of the adventure. It did lack the bombastic thrills and kitchy mechanics of my Firefly campaign, but the solid, fundamental qualities of this adventure more than made up for it, I felt. Overall, I'd say this was one of my favorite sessions this year.

First, let's start with the players. I had five people; originally six, but there was a no-show. I expected this; in a venue of strangers, there's always some one who can't make it. I'm not mad at all, I just wasn't surprised. I'd actually call the one no-show a net gain for the game, though, as this put our player count at five, which I think is just about perfect for most RPGs (four ain't bad, either). Six isn't bad of course, but depending on the game, six can really stretch the mechanics and compromise the quality of the session. I was afraid that would be the case with EotE, but I'm glad I didn't have to test that theory yesterday.

Of the five that showed, I was very happy to have a great, motivated, smart group of individuals. Two of them were retuning regulars from my Firefly game and one of them had been a part of a few of my one-shot sessions over the year. So they were known quanitities, and they were just as awesome as I had hoped they'd be. Of the two other players, one of them (as mentioned) was brand new to role-playing games. He did indeed have that deer-in-the-headlights look a few times throughout the session, but by the end of the evening he seemed to be throwing dice and RPing it up with the best of them. He did great, and I'm glad he joined us.

The other player was an EotE vet. Vets pose a special challenge to me; they are a window into other playing groups, and thus other playing styles. I'm always curious as to how I match up with his other RPGing experiences. That is to say, I always hope to be better. I'm not competitive about a lot of things (almost nothing, really), but I thrive on the tireless pursuit of being a great GM. He definitely had a good time, but I'm not sure if I quite blew his socks off. Hmm. I'll have to work on that in the future...

It turns out the third time was indeed the charm when it came to this latest edition of Star Wars roleplaying. My first EotE game was a mess of conflicted interests; my second game was a lackluster starter game thrown at a crowd of vets; but this third game hit the mark perfectly. It was challenging without being frustrating, interesting without being confusing, and fun without being ridiculous. There were several fantastic moments throughout the game. I'm not going to to go into details because of spoilers and such, but nevertheless, I was very happy with the adventure itself. After playing it once, "Jewel of Yavin" is making a strong case for being the best published adventure I've ever read/run.

As for the system itself...that was perhaps my favorite part of the entire game. Long stretches of the adventure simply entailed the players describing their characters' actions, and then rolling dice. In any other game, this would be maddening, boring, tedious to the point of sheer frustration. In Edge of the Empire, though, every dice roll was fun. Coming up with clever ideas to add boost dice; watching the meticulous balance of Light and Dark side tokens to upgrade or downgrade dice, and coming up with various levels of good and bad news dependent on the rolls was devilishly fun for myself, and I daresay the group as a whole. There was almost never a "you pass/you fail" moment from the dice; the dice actively pushed the story in various directions through play. The dice didn't hinder the story; the dice were helping me tell the story. Backed with a well-structured adventure to contextualize all that planning and rolling, and this game came as close to running itself as I'd ever seen.

The only downside to the helpful system is the inertia left me scrambling for the few things it didn't cover. NPCs, for example. I was so caught up in planning and handling dice rolls that I found myself un-motivated to roleplay the various NPCs who showed up throughout the adventure. I think I did an adequate job, but compared to how smoothly everything else went, the gap there felt pretty noticeable to me. In future adventures, I'll have to be sure to either minimize the amount of NPCs, or give them some easy-to-follow personality quirks that makes a basic level of roleplaying at least feasible.

The other one issue with the game was the atrocious running length. I committed to running "Jewel of Yavin" before finishing my reading of the book. As a result, I did not realize I had just committed to running a three-session epic adventure as a single-session game! If/when I do it again, I have some big thoughts on how to whittle "The Jewel of Yavin" down into a single session game. On the other hand, it is very easy to see "The Jewel of Yavin" expanded into an entire multi-adventure campaign. My players and I persevered, but unfortunately we ran out of time before we could fully complete the adventure. Something to work on for next time!

Overall, as said before though, I loved yesterday's game. I am so happy and grateful it went down as well as it did. I absolutely cannot wait for the next chance to do something like that again! 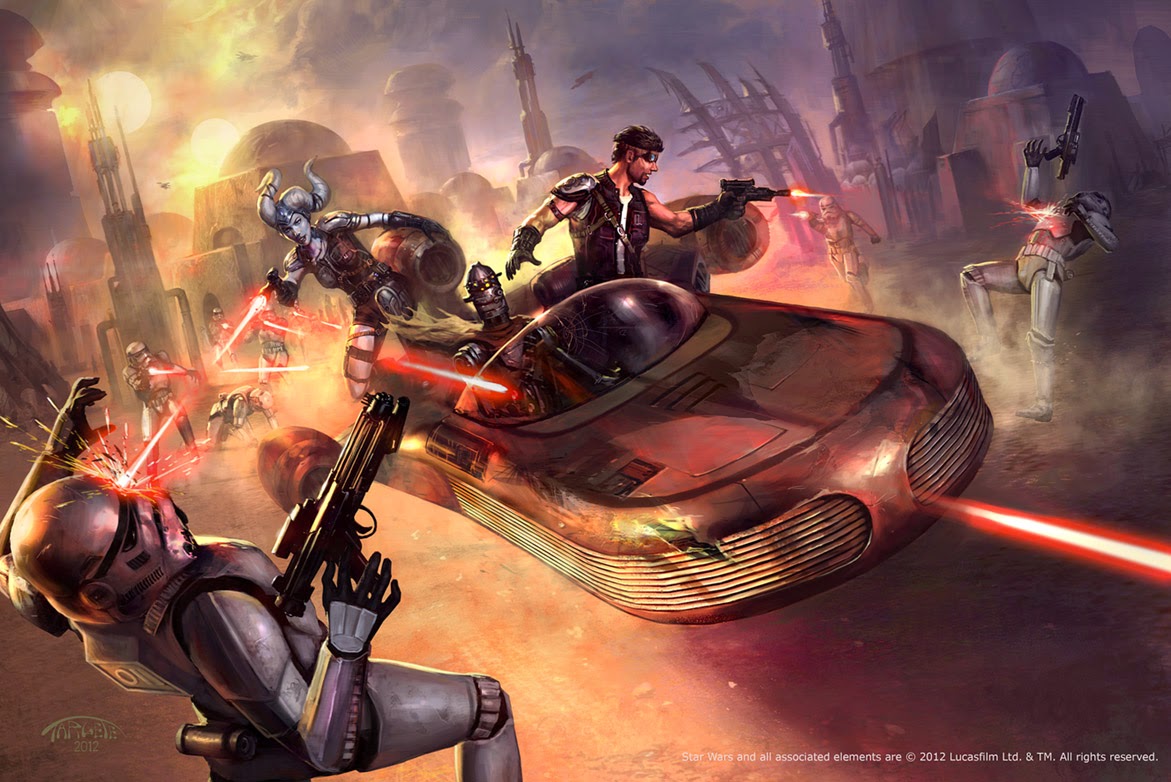