After a three-month break, I am back behind the ol' GM screen this weekend. Sunday, I'll be playing the Star Wars: Edge of the Empire adventure "The Jewel of Yavin." My regular group has splintered for the holidays, so for the first time in ages, I went public with this game. As expected (being Star Wars and all), it filled within barely 8 hours of posting.

I'm not completely back yet, though. I am going to wrap up my involvement as a player in two of my friends' excellent campaigns through December. I will return proper in January.

As is typical for a game about to happen, I have a mix of excitement and nervousness. There's a lot of prep to be done, and I have a lot of other things competing for my time...silly things like my job, and my Masters thesis. But worry not, Dear Reader: I will properly prioritize my time and have the adventure ready for Sunday! 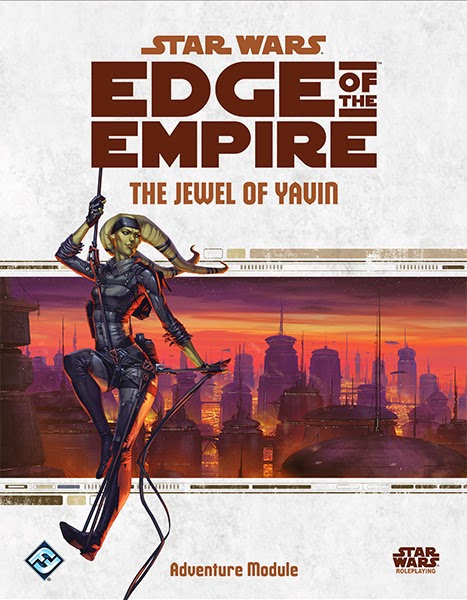 I hate doing the "random thoughts loosely organized by bullet points" posts, but that's where I'm at right now and I'd like to keep my blogging momentum up. So here are some random thoughts going on in my head right now:

-This will be only my second session running Edge of the Empire. My first ended in disaster. I was in the throes of obsession with the Apocalypse Engine, and did a mid-game system switch after I got frustrated trying to remember all the rules to the game. It was less about the rules being many or complex and more about me being lazy and unprepared (not to mention being enamored with a completely different game). I ran EotE simply because it was new at the time and I knew it would pack the room. This time, however, I'm better versed in the ways of the system (not to mention I have a few players who are accomplished at the rules, as well), and I actively want to play this game, with no other games I'd rather play floating around in the back of my head. (Well, maybe The One Ring, but I'm not even close to finishing that book so I wouldn't be able to switch to it, even if I wanted to).

-I intend on playing all the way through "Jewel of Yavin," as this is a one-shot with no ability to go beyond a single session, even if I wanted it to. Though I'm still reading the adventure, it seems pretty sandboxy, so with a little direction I bet I could nudge the players towards completion while still giving them freedom enough to do their own thing.

-Pacing, a facet of GMing that I typically tend to obsess over, is going to be extraordinarily important this session. I estimate even a group laser-focused on finishing the main plotline will be pushing the 5-hour mark, and I am drawing a hard line at 8 hours. Even that best-case scenario is a little bit outside of my comfort zone (3-4 hours). So I'm going to have to pace myself and my players, taking breaks as needed, keep encounters moving along, and not letting meta-things like table talk, rules referencing, or lunch arrangements take up too much time, or break momentum.

-I've got two new players coming to my game this Sunday. Both are RPG vets, though, and one of them is familiar with EotE, so I don't anticipate any problems there.